Orthography is the common way in which letters are arranged in a particular sequence.   Due to the complexities of English, this type of knowledge is critical for spelling competency.

Parents often say that the problem with their child’s spelling is that the words are written phonetically.  In actual fact this is not the key problem. In reality, children who are spelling phonetically are demonstrating that they have good phonological awareness (which is the ability to break a word into the single sounds contained within the word) and they know at least some of the letters or letter combinations which can be used to represent those sounds.

The problem with children who spell phonetically is usually two fold.  First, they don’t have sufficient phonic knowledge, in other words they only know some of the ways that a particular sound can be represented and this is a particular problem in English.  For example, they might know the most common way of representing the /sh/ sound ‘sh’, but not alternative letter combinations (e.g., ‘ti’ like in ‘invitation’, ‘ci’ like in ‘musician’, ‘si’ like in ‘mansion’ or ‘ch’ like in ‘machine’).  Secondly, they tend to have poor orthographic knowledge.  This includes a knowledge of the position in which a particular letter combination is used in a word (e.g., ‘oi’ is rarely used at the end of a word), spelling rules (e.g., ‘e’ goes away when adding a suffix beginning with a vowel), prefixes and suffixes, root words (which often are Latin or Greek in origin) and syllabification.

The research shows that poor spellers are not particularly good at identifying or using this type of orthographic knowledge (see Holmes & Quinn, 2009), but more importantly specific training in this area is an effective way of improving students’ spelling (Ise & Schulte-Körne, 2010). 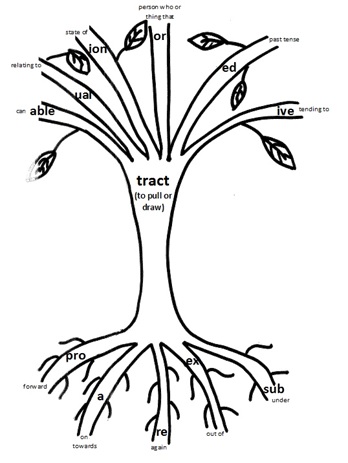 Place a root word on the trunk, suffixes on the branches and prefixes on the roots.  How many words can be made combining the root word with suffixes and/or prefixes? 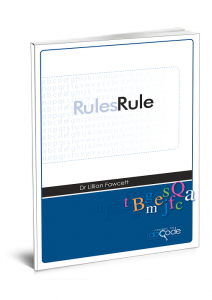 Help children apply these words when learning spelling words, editing their own work or commercial editing exercises and when reading.

Instead of a ‘Word of the Day’ learn a root word, prefix or suffix each day.  Try to use words which contain these elements as often as possible throughout the day.

Play games and do puzzles which require the use of knowledge of the common order of letters to help in their solution.

Ender Bender or modified Scrabble in which players can remove letters to correctly add a particular suffix (e.g., taking away the ‘e’ in ‘hope’ to make ‘hoping’).

http://www.eslgamesplus.com/root-words-game-for-word-building/ (Although designed for students learning English as a second language this game would be of benefit to all students.)