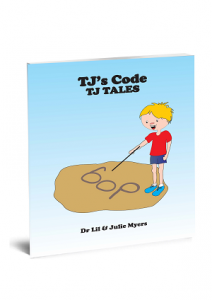 Before children even start on the learning to read journey, they need to understand that the written language is a code for the spoken language and it is through oral and written language that we are able to accurately and quickly communicate with each other.  An effective way of illustrating this concept is to read TJ’s Code. This story starts with TJ and his family communicating in grunts.  However, as a results of TJ’s frustration of not being able to tell his family about his day in the park, he invents words. Next there is a misunderstanding when TJ sends his family a picture of his holiday. Consequently, TJ designs a writing code.

Next children need to realise that our oral language is composed of a series of sounds that we put together to form words. Then they need to be able to isolate the individual sounds in each word (so the sounds in ‘dog’ are /d/-/o/-/g/ and the sounds in ‘sheep’ are /sh/-/ee/-/p/).  This is the basis of spelling.  They also need to be able to blend different sounds together to form words (so when told the sounds /d/-/o/-/g/ they can tell you the word is dog). This is the basis of reading. Therefore, before you even start teaching your child how to read or spell, it is beneficial to do a whole range of activities to help develop these skills. For ideas see the post on Pre-Reading Activities.

The next step is to learn how we represent each of those different sounds in writing. This requires children to firstly learn the letters of the alphabet as this is the code we use in English to represent the different sounds. The difficulty in English is that there are approximately 44 different sounds (I say approximately because there are differences depending on region and dialect), but there are only 26 letters of the alphabet to represent these sounds. This means that we often have to combine letters to represent sounds and/or letters or letter combinations are used to represent more than one sound. For example, ‘a’ can be read as /a/ as in apple, /u/ as in along, /e/ as in many, /ay/ as in table, /o/ as in watch, /ar/ as in bath, /or/ as in ball. This is further complicated by the fact that many sounds can be represented by more than one letter or combination of letters. For example, we can represent the /er/ sound by ‘er’ as in fern, ‘ur’ as in church, ‘ir’ as in bird, ‘ear’ as in earth, ‘or’ as in word.

Due to the complexity of the English language, I would recommend that you begin by teaching children the common sound represented by each letter of the alphabet (e.g., a=/a/ for apple, b=/b/ for ball).  Once children can quickly and automatically read and write the common sounds of each letter of the alphabet, then there are a large number of words that they can decode (i.e., read) and encode (i.e., spell).  For resources to teach the letter sound look at all the tabs under: multisensory-reading-program-level-one

View all posts by Lillian →
Vivid Detail
The Problematic Apostrophe